Received the club a hour ago and thank you very much!

Your #1 Choice for Single Golf Irons Since 1982

At Ironfinder®, we are golf iron specialists! Our goal is to help you replace a missing iron or add an iron for your valuable pro-line iron set. We know how disconcerting it can be to lose, break or otherwise misplace an iron and we empathize with you. The good news is Ironfinder is here to help. Additionally, Ironfinder carries matching add-on irons and wedges that may not have originally been included with your iron set but could help to improve your golf game.

Ironfinder is a second generation family business founded in 1982 based on the principles of hard work, integrity and a strong desire to provide excellent customer service to our fellow golfers. We are well versed with the golf irons we carry. Ironfinder has a wide selection (approximately 11,000 irons as of right now) available for immediate delivery from most major manufacturers with models ranging from the 1960's up to last years models. With this many irons in stock, there is a good chance we have the iron you are looking for or a good quality substitute.

We look forward to having you join our growing list of satisfied customers!

"The Ironfinder" was founded in 1982 by H.H. Jones of Santa Ana, California. From its humble beginnings of working out of the family garage, the original focus of the business was providing replacement irons for golfers. H.H.'s background was in technical writing which lent well with his desire to create a printed publication. As a result, he married the need for replacement irons with a new publication and launched the self titled guides to "The Most-Wanted Pro-line Irons, Most Valuable Woods, Putters" which included pictures and/or descriptions of the most popular models at that time. The publications also listed inventories that were available for sale and also solicited owners of golf collections to list their inventories with "The Ironfinder".

The first issue of "The Ironfinder" was published in 1984 in cooperation with Jim Kaplan of Vintage Golf, Northbrook, Illinois. At the time, Jim assembled three books which were collections of golf manufacturer's catalogs. His books were well received by the golf collector community. By having Jim listed in cooperation with The Ironfinder, it gave the new Ironfinder publication a little more exposure and credence. The business inventory was listed by brand and model showing whether or not an iron was available. Each model was indexed with an unique number to look-up its picture in the back pages. This small 16-page pamphlet was the beginnings of more to come.

In 1985, a second, revised-look issue was published simply called "H.H. Jones' Ironfinder" with a listing of over 3,800 clubs available for sale. This issue changed the organization to show the picture right above the available inventory. At 82 pages, it was a big improvement in both size, not to mention sales. The first printing of 500 sold out quickly. A second and third printings were subsequently ordered.

The following year, H.H. moved the business to Escondido, California to be closer to nature - as in lots of green nature - backing the 2nd hole of the Escondido Country Club. From this location, the business operated for 13 years with the authentic background sound of clubs hitting balls! This period of time saw the business grow slow but steady with inventory count reaching over 10,000 irons, woods and putters by 1999.

In 1987, a new and different version of the catalog was created to simply show pictures of iron models along with a condensed inventory listing, like a reference. This publication was titled "Ironfinder Scrapbook". A second printing was done in 1990. The Scrapbook included over 200 of the most popular models from 20 manufacturers based on over 10,000 requests received. It was a popular little reference guide to help collectors "out in the field".

Golf shop owners and course pros indicated that a smaller, more handier sized version would be helpful. By 1992, this feedback resulted in the printing of the "Instant Ironfinder". This 62 page combed-bound publication was sized as a quick reference and targeted at golf professionals. It contained smaller sized identification pictures along with current inventory.

The name "Ironfinder" was trademarked in 1991 with the U.S. Patent & Trademark Office as the name gathered more recognition. "Ironfinder II" (70 pages) was published in 1993 which had even more models (as determined based on over 20,000 requests received to date) and a larger listing of clubs available for sale.

In 1995, a single webpage was launched that provided highlights and contact information for the company amid the fledgling internet world. As time went on, it became evident that this new medium would become the replacement of the paper publications. The inventory could be current, not static and customers could order "online" - wow, what a concept! It seemed everyone was getting a computer, why not! A plan was drawn up. By late 1998, the domain name ironfinder.com was registered. Progress was slowly being made until one spring day, H.H. got a wake-up call. Due to health reasons, H.H. sold the business to his son, Tracy, in August of 1999 and it was moved to an office/warehouse location in Costa Mesa, California. 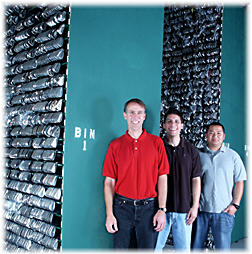 The development of an e-commerce website was started to replace the $15 hardcopy publications that Ironfinder was known for. Since the namesake of the business indicates finding irons and the vast majority of our customers were seeking irons, the decision was made to focus solely on irons and no longer carry woods or putters. The new website was built around this idea by allowing the direct purchase of irons on-line and providing the ability to save a "request" for something not currently in-stock. Customers subsequently would be notified by email when an iron was in-stock. Additionally, the decision was made to only list irons on the website directly owned by Ironfinder in order to ensure consistent condition ratings and shipping commitments made on the website were met.

Our original e-commerce website was launched on January 1, 2001 to much success and provided more information than ever before and even better - for free! Today, information for 18 different brands and 959 active models is available including identification pictures of the face and back of the head for every model, a written description and loft information (where available) as well as "real-time" inventory listing of every club in our stock. As the internet and e-commerce continues to evolve, we have periodically launched new and improved websites. Our current "responsive" website was launched on October 1, 2019 further improving the experience for our fellow golfers trying to replace that missing iron or add another one to their bag by making it even easier whether using a desktop computer or a mobile device while out on the course.

Homer H. Jones (also known as H. H. Jones and "Hammerhead" Jones), founder of Ironfinder, grew up in Pittsburgh, PA loving the words of great men of the past, the present and those who gave meaning to the terms: loyalty, honor and a good cause. At the age of 10, he used this love of words to win a Bible for completely reciting Lincoln's "Gettysburg Address". When Will Rogers died a few years later, Homer was devastated. Written prose had true meaning and impact throughout his life. 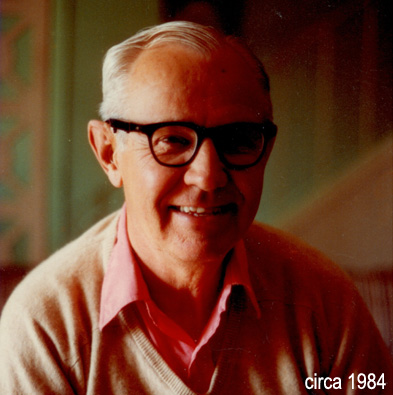 As a young man interested in making a difference, Homer enlisted with the USAAC (United States Army Air Corps, now called the Air Force) in 1939. He ascended ranks to Private 1st Class when after only 9 months he contracted Spinal Meningitis in the Army barracks nearly costing him his life. The result of the illness was 75% hearing loss and an honorable discharge in 1940.

His attraction to writing did not fade. After his discharge, he attended Texas Tech University and graduated in 1946 from Ohio State University with his bachelors of science from the school of Journalism. After graduation, Homer started his career as a copy editor for the Louisville Courier Journal and later worked for the New York Herald Tribune.

In 1954, he met the love of his life, Jean Kniedler, at a dance and 7 months later they married in Pittsburgh. They moved to California to follow the aerospace and defense jobs that were becoming readily available there. During the 1950's and 60's, he worked as an editor on various projects at Interstate Electronics.

Homer was a man of integrity, conviction and was willing to work hard to build a better life for his wife and family. They had two children, Tracy and Holly. In 1965, Jean suffered a massive stroke that left her paralyzed on the right side. She survived but the stroke severely affected her speech and her ability to tend to the children effectively. In short order, the problem would manifest itself -- Homer had trouble hearing; Jean had a speaking deficiency. Some men would run from this situation but not Homer who remained deeply committed to his wife and children.

Homer's fondness for all types of writing continued to influence his life. His passion grew to crossword puzzles. He enjoyed writing verses and always had a liking for the old Burma Shave signs that once dotted the highways. So much so, that he founded a club called the Society for the Preservation of Burma Shave Slogans in America. He was civic minded and cared about helping others. He wrote verses about highway safety, health effects of smoking and ecology. His favorite original slogan was "Smoke 'em long, smoke them often, save the coupons for a coffin".

One day, Homer went into a thrift store and nearly tripped over a bag of golf clubs. Noticing that they were quality clubs, he bought them. He sold them to a friend for a "good amount of money" and before long he was buying and selling golf clubs on a regular basis. Encouraged by this success and always the writer, he put together a well recognized "yellow booklet" cataloging the manufacturers of golf clubs under the name "H. H. Jones' Ironfinder". In 1999, Homer had heart by-pass surgery and made the decision to hand the business down to his son. To this day, Ironfinder is contacted by people who bought those catalogs or who had met H. H. Jones in person and ask how he is doing. Homer was a good man, a man with great passion for writing as well as a devoted husband and father. Homer and Jean were married for 53 years before she passed away in 2007. Homer passed away in 2011 at 89 years old. He is with his beloved wife, and he is dancing on that floor where they met so long ago.

Received the club a hour ago and thank you very much!

WHY SHOP WITH US?

Consult our specialists for help with an order or for selection advice.

We stand behind our clubs and want you to be satisfied with them.

Various shipping options to the US and over 70 countries.